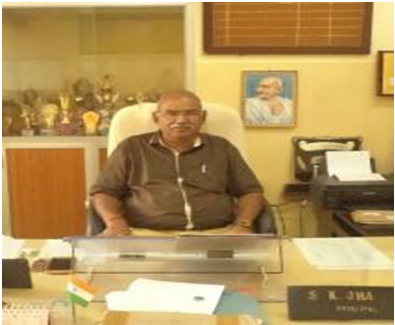 As a Principal of Jawahar Navodaya Vidyalaya Benagoria,Dhanbad, I extend hearty welcome to our Vidyalaya Website.Jawahar Navodaya Benagoria,Dhanbad has been a proved beacon in providing good citizen to the society and above all good human beings with the help of a dedicated team of teaching and Non-teaching staff members who uses the supreme art to awaken joy among young learners in creative expression and knowledge. Jawahar Navodaya Vidyalaya Benagoria,Dhanbad works on student centric approach which offers rewarding educational experiences to all who choose to focus on excellence. It addresses the contemporary needs of the learners by successfully creating a dynamic environment to trigger learning experiences and awakening the natural curiosity of the young minds and thereby facilitating the art of teaching. It aims at the commitments to nurture and equip young learners with the uncommon ability to become confident, sensitive, socially committed and to develop as an all round individuals.

Jawahar Navodaya Vidyalaya , Benagoria,  Dhanbad is situated at the distance of somewhat 42 Kms from Dhanbad Junction.

The Dhanbad District came into existence in 24.10.56 on the recommendation of sate reconstitution commission vide notification 1911. Dhanbad is the part of erstwhile manbhum  the area conferred to Raja Man Singh, chieftain of greatest Mughal emperor Akbar, hence the name Manbhum.

The area is rich in coal and the same is extracted by public sector units like BCCL, CCL, ECL and have got the status of Mini Ratna. The whole economy of the are evolves around the royalty obtained by cool excavation. Dhanbad district has got a premium institute by the name ISM (INIDAN SCHOOL OF MINES) that is perhaps first of its kind in India. It has get a medical college also. Apart from these there are so many colleges and schools.

Initially JNV, Dhanbad happened to be run an a temporary site at new building it was sifted to at its present place Benagoria in the year 2008.

The vidyalaya has a big campus and has got it boundary, electric supply system, water supply system inside the campus. Though in summer season area appears arid and dry but in rainy season greeneries are apparently visible. A lot of plantation inside the campus adds the beauty in nature as well as school campus.

The vidyalaya runs at full swing from VI to XII. All the classes have two sections each. In intermediate classes the vidyalaya is having two streams – science and humanities. Admissions are made strictly as per guidelines set up by the Navodaya Vidyalaya Semite. Maximum discipline is maintained Zealously among the students. Maximum efforts are taken to keep the environment and working condition very congenial and friendly.